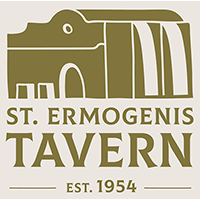 We invite you to celebrate any event in the Tavern of St. Ermogenis.  The building is absolutely new, just after overhaulwith situated in a convenient location and majestic views, exquisite cuisine and entertainment.

In our tavern you can enjoy a tasty meal, and also we have a large playground for your children.

Our tavern is located in a unique place. On one side is one of the most beautiful beaches in Cyprus, on the other – one of the most famous sights – Kourion, which is an impressive archaeological site of Limassol, containing mostly Roman and Byzantine ruins.

It is believed that the site of Kourion was first settled in the Neolithic times, with the earliest evidence goimg back to the 4500-3900 BC, but the city itself was founded in the XIII century BC by the Argives. For centuries, Kourion played an important role in many regional conflicts. During the Cyprus uprising against Persia (fifth century BC), its king – Stasanor – betrayed his country, giving his support and troops to the Persians. Nevertheless, Kourion later supported the struggle of Alexander the Great against the Persians (fourth century BC). Kourion continued to exist during the Roman and Byzantine periods, the buildings, monuments and other structures from this era are still visible. Perhaps the most memorable place that can be seen today in Kurion is its ancient theater. It is still intact and capable to accommodate up to 3,500 spectators, the theater in Kurion refers to the second or third century AD. Also you can see the remains of the Roman market of the third century AD, which includes some public baths and Nymphaeum.

In the immediate vicinity of the tavern is the church of St. Ermogenis. Saint Ermogenis was born in the IV century in Finikunda in Attalia, Asia Minor. Coming from the family of Christians, he became an enthusiastic preacher of his dogma. His sermons were quite popular among the locals, and this became a nuisance for the king of Samos, Satorninos, who ordered him to be captured and tortured until he renounced his convictions.

St. Ermogenis was tortured, but did not betray his faith, therefore Satorninos eventually ordered to be execute him. Then the Samos Christians took his dead body and put it in a wooden box that was lowered into the sea, and brought its waves to the shore of Kourion. Christians who found a box on the shore built a church dedicated to St. Ermogenis.

This temple was destroyed during the attacks on the island, and a new one was built in the 17th century. In the temple, which stands today, are the relics of St. Ermogenis, which believers consider miraculous.

So, take your seats, please, and enjoy!